Ahmad, who worked in plastering before military service was imposed on him, didn’t think his demise would also be necessitarian.

Ahmad met his demise on the hands of an unknown perpetrator while on duty securing of El-Tahrir Square on 25 of January 2011, making him one of the first victims of the January Revolution.

There is a conflict narrative regarding the Ahmad’s death; one source claims Ahmad was injured by a sharp object and died on the scene, before being transported to El Hussein University Hospital, while another claims that he was hit with a stone that was thrown on him by a protester and was suffocated when he fainted by the tear gas fired by Central Security Forces to disperse the protests. Both narratives agree on one thing, he was already dead when he was transferred to the hospital.  By coincidence, his doctor recognized him as both happen to come from the same town, Al Fashn, Beni Suef Governorate (145 km south of Cairo). The doctor contacted Ahmad’s family to inform them.

Ahmad Aziz Faragallah (20 yrs.), is the middle son to Aziz Farag (48 yrs.) and the middle brother of four males the eldest of which was 22 years old and the youngest 12, back in January 2011.

Ahmad’s father was a farmer and his siblings were daily wage workers for the neighbouring families, and before Ahmad’s recruitment, he was the main provider for his large, poor family.

“I wish I could’ve seen him before they buried him, and ever since that day whenever I think of him I cry.” This was all that Ahmad’s mourning mother’s wished for., while his brother Taha still awaits retribution through the judicial system. “We’ve left those people to the judicial system and they will give us justice.”

Ahmad left behind his wife (and cousin) Naglaa who hadn’t completed her first year in her husband’s family’s modest house, and neither the nine months of her first pregnancy at the time of his martyrdom. His son welcomed life without a father; only a name in the police section of the Egyptians Honors List, a silver medal and a pension of 845 EGP (52.56 $) that his parents and his wife share. 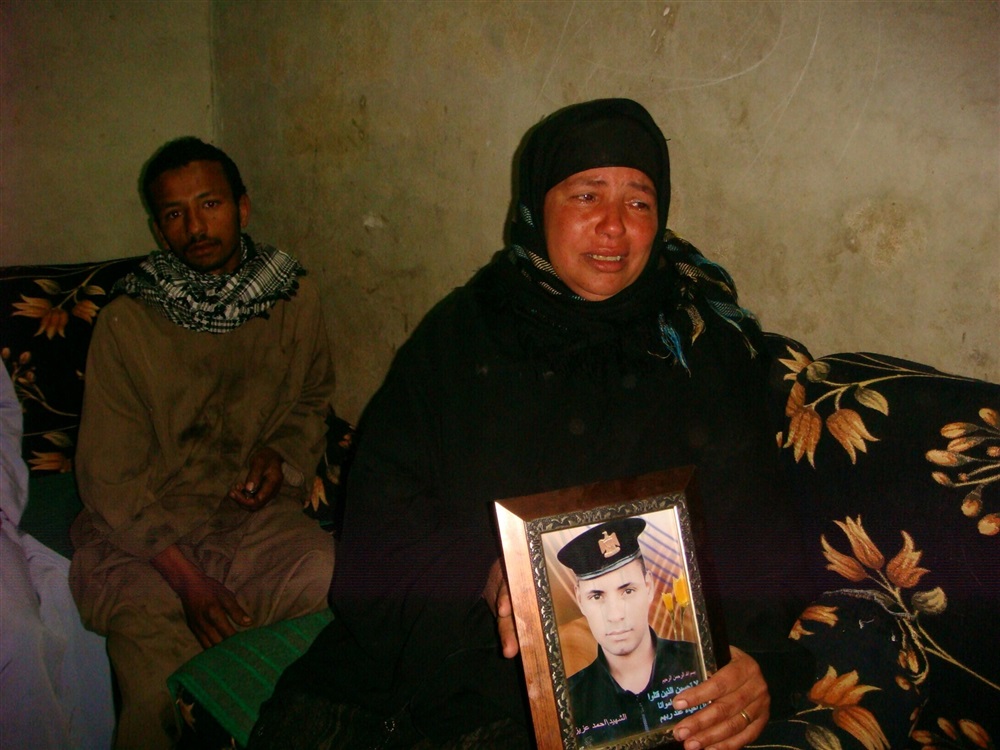